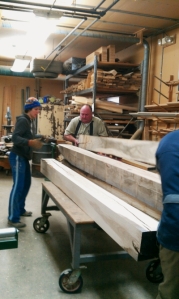 uring my apprenticeship under Richard Bresnahan at the Saint John’s Pottery from 2004-2006, I learned about many other things in addition to clay, and was given the opportunity to mill some trees into lumber.  Some trees we milled into 8 x 8 posts and other larger pieces, many into boards and 2 inch material.  Last weekend my dad helped me un-stack and re-stack a large pile of my lumber to get some of the 8 x 8’s off the bottom of it, so that we could plane them and put them into the barn as replacements for the posts I took out.  I should have taken a “before picture” of the posts so you could get a sense for the transformation that planing can bring to a piece of wood.

While an apprentice, I helped my teacher, Richard, bring some of his wood to be planed to a local wood-worker named Conrad Legatt who lives north of St Joe.  Conrad is a cheery and handy guy who dabbles in all sorts of interesting things, including smoking meats and bee-keeping.  Oddly enough, he was one of the local beekeepers who helped mentor my brother Joe when he first got into bees as a kid.

He has some well-built older machines that can accommodate large pieces of wood (if you have the help to move the heavy suckers through them).  My dad and mom and brother Tim graciously set aside part of their Saturday to help me wrestle the four 10 ft posts around Conrad’s shop.  First we ran two adjacent sides of each post through his joiner, to get two flat edges that are square to each other.  Then we finished them in his large planer.  Planing can give wood quite a smooth surface with beautiful sheen.  My dad and brother were amazed at the change, and awaited each pass of the planer with a grin.  It is a little like unwrapping a present.

Conrad told me I had two elm posts and two ash posts, so I will be able to alternate them down the middle of the barn.  Which, I think, will look rather nice.  This picture \/ doesn’t do them justice, you’ll have to see them in person sometime… 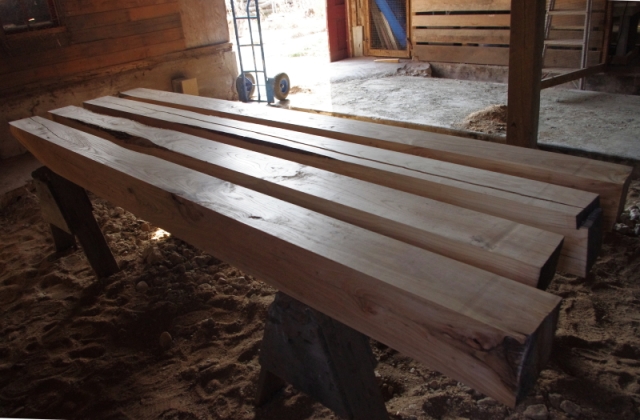 This entry was posted in Barn Restoration. Bookmark the permalink.