y parents gave up on their weed-choked strawberry last year and decided to start over this year.  They chose a variety called Honeoye, which is a June-bearing strawberry.  My mom tells me you’re supposed to plant strawberries in April, we didn’t get them in until the end of April.   Mom prepped the spots for the plants, 24″ apart in a row by digging about a six

inch circular trough with a mound of dirt in the center to set the plants down on.  This is to encourage the roots downward.  The plant was then carefully situated on the dirt 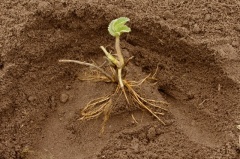 mound fanning it’s roots out evenly around it.   We added dirt until the roots were covered and compressed the plant down into the ground.

The dirt should ideally come to where my thumb is pointing after the plants are in the ground and watered.  The rows were 48″ apart with the idea the strawberries will run and form a matted bed.  We also put cans around each plant, both to hold in water when watering them manually and to stop cutworms.  We use old gallon coffee

cans cut in half, and press them down 2 inches or so into the ground.  Last we watered the strawberry plants with about 2 cups of water to each plant and mounded the dirt up around the can.  Cutworms travel through only the top inch or so of soil, but will gnaw right through the stem of your little fledging plants, felling them like trees.  We won’t get any strawberries this year.  The recommendation is to thin the bed each year after harvesting the berries to a 12 inch wide row.  Like grapes, I guess strawberries do better when they are “pruned” back.

This entry was posted in DIY!, Food and Gardening. Bookmark the permalink.