New Colonies in the Hives 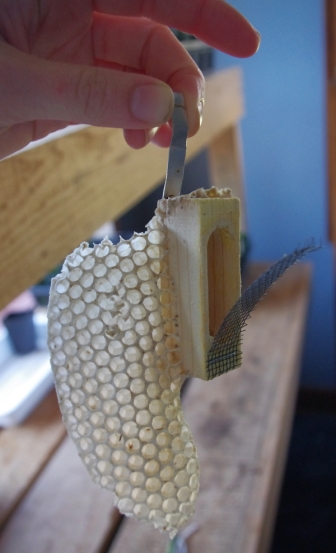 ell, since my brother Joe choose not to treat the colonies last fall for mites when we found they were dangerously infested, but to see what nature’s course produced, they died during the winter because of the amount of mites, as he expected.  So he had to start over this spring by ordering a couple of ‘packages’ of bees  which he installed in the hives a week ago.  The queen that comes with each package is separated in a ‘queen cage’ because she was raised in a few different hives, not the same colony the other are from, and they need time to get acquainted.

Sometimes people use marshmallows or sugar candy to time release the queen: by the time the bees eat through the sugar they have gotten used to each other.  Since the drive is so long from California to MN, the queens were acquainted by the time Joe hived the packages.  So he did a “direct release” of the queens so they could start laying eggs soon after.

Since the bees went in before there is  much for blossoms around, he also put in a solution of sugar water in a jug with tiny holes drilled in it to make sure they have plenty of eat before the farm blooms out.

This entry was posted in Beekeeping, DIY!. Bookmark the permalink.